How to Fight Muscle Atrophy After Injury: A Personal Trainer’s Guide

Eventually, either you or one of your clients will get injured. We dive into the science so you (or your client) can come back strong. 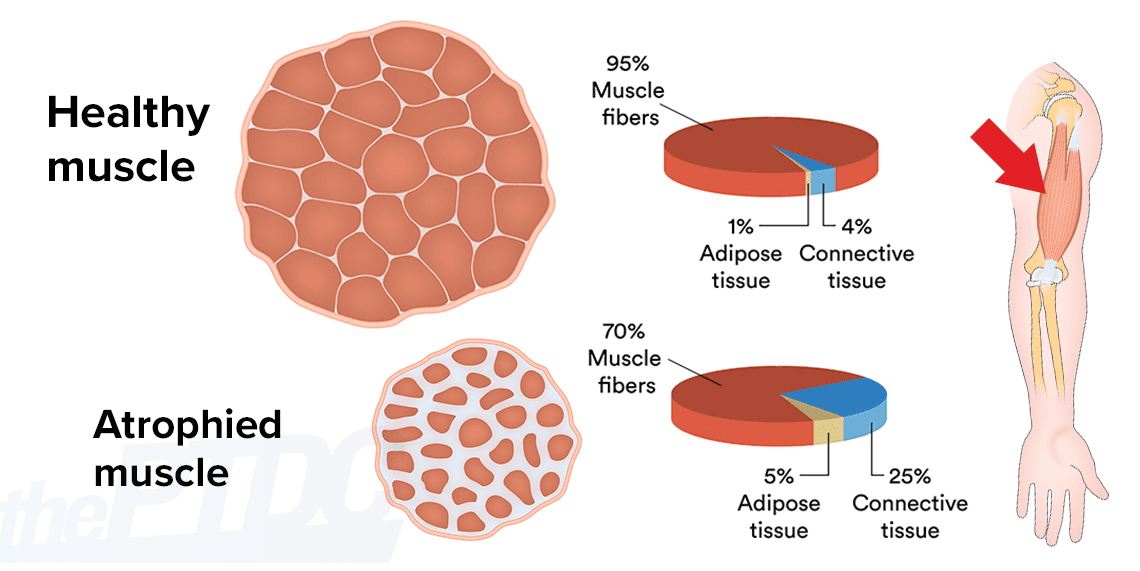 People get hurt. Sometimes those people are your clients.

As sure as the sun will rise, a personal trainer will have to deal with muscle atrophy after injury at some point in their career.

This is true whether you work with athletes or nonathletes, old or young.

After they get hurt, they’ll come to you looking for help—or at least wanting modified workouts.

Or the person who gets injured could be you. I should know. I’ve suffered torn ACLs three times in the past five years.

As a result, I no longer have any knee ligaments. And I know I’m not an outlier.

A lot of personal trainers are hard-chargers in potentially injurious activities, whether it be downhill skiing, mountain biking, or (in my case) Gaelic football.

However it happens, and whoever it happens to, to build an effective plan for coming back from injury, you first need to separate fact from fiction about muscle atrophy.

And folks, there are a lot of myths about muscle atrophy floating around out there.

As with seemingly every other domain nowadays, people believe some crazy stuff when it comes to muscle atrophy after injury.

This article will help you talk clients off the ledge by teaching you:

Let’s set off on our road to more effective recovery.

Muscle atrophy fundamentals: Why you feel like you’re shrinking

First and foremost, skeletal muscle atrophy (or decline in size) is real, and it can occur for several reasons:

The extent of skeletal muscle atrophy will vary depending on whether the cause is disuse or disease.

Since we’re discussing muscle loss due to injury, we’ll focus on disuse atrophy.

At a cellular level, atrophy results in a smaller cross-sectional area of muscle fibers. Note: The number of muscle fibers does not decrease. The existing fibers just shrink in diameter.

Atrophy shrinks the size (but not the number) of muscle fibers.

The loss of muscle mass leads to reduced force output, a.k.a. strength. Muscle atrophy can also be a consequence of decreased protein synthesis.

When you’re recovering from an injury, you can either be fully immobilized (as in bed rest) or partially immobilized (having a limb placed in a cast or crutches, etc.). Both can lead to disuse atrophy.

Bed rest is more severely deleterious to muscle. In fact, 10 days of bed rest can cause you to lose up to 30 percent of your muscle mass. But obviously, bed rest is normally reserved for critically ill patients, and at that point, losing ‘“them gainz” is the least of your concerns.

Partial immobilization is less drastic but still impactful. For example, immobilizing a lower limb (leg) with a cast has been shown to decrease the leg muscle volume by 12 percent. That’s one-eighth of your muscle size, gone.

For unknown reasons, the loss can be more drastic at the quadriceps. You’ll also lose type II (fast twitch) muscle fibers more quickly than type I (slow twitch) ones.

What increases or decreases muscle atrophy?

A number of factors influence the speed and severity of muscle atrophy. The extent of the impact will vary by individual.

There’s a big drop-off in size and strength early on, but the decline tends to decelerate and eventually plateaus.

In fact, the most drastic reduction in muscle strength occurs during the first week of immobilization. The same is true for muscle protein synthesis.

Another way to think about it: Imagine that a person is going to lose 30 percent of their muscle size and strength while recovering from an injury.

They’d lose most of that strength (say, 20 percent) within the first seven days. (These are arbitrary numbers, but you get the idea.)

It’s important to be cautious in how you interpret and act on these findings. While the rate of change is greatest during the first week, that’s not a reason to rush back to the gym.

In fact, shortening the immobilization phase doesn’t alter the rate of change. And if you start moving before your body is ready, your risk of reinjury goes up. 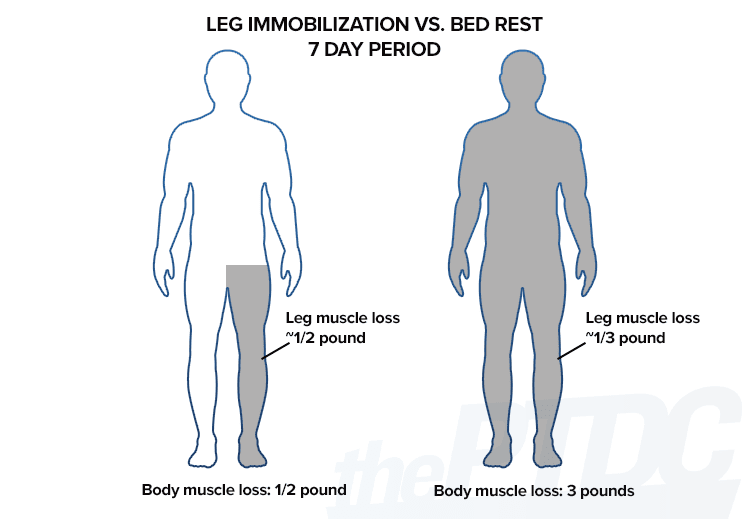 While the nature of an injury doesn’t directly influence the rate of atrophy, knock-off effects can occur.

For example, if you have surgery you may be on bed rest for a couple of weeks.

If you sustain a less severe injury (say, a broken finger) you won’t be immobilized for as long—so the likelihood of muscle atrophy won’t be as high.

Interestingly, injury location does seem to influence the muscle atrophy rate. The effects are different for both full-body vs. single-limb immobilization methods.

Well, casting appears to affect the lower limb more than the upper limb. This makes sense, since the demands on the lower body are much greater in terms of muscular strength and output. But note: Atrophy from upper-limb injuries is far less researched than from lower-limb injuries.

In the upper limbs (arms), the elbow flexors, forearm muscles, and triceps appear to be the most affected muscles.

Meanwhile, as we established earlier, lower-limb literature indicates greater atrophy at the quadriceps, where single-limb immobilization can lead to a 5 to 10 percent decrease in size within four weeks.

Okay, I’ve got bad news and good news. The bad news is that, for older adults—injured or not—muscle atrophy is an ongoing threat. The older you are, the more prone you’ll be to sarcopenia, or muscle wasting due to age.

Muscle mass decreases by 3 to 8 percent per decade after the age of 30.

Older individuals exhibit decreased rates of protein synthesis and muscle mass. Nothing will stop this ongoing assault on your muscles, save for death, and that makes for a bleak article.

However, you can keep the effects of sarcopenia held in check by staying active. But note: These risks are not necessarily caused by injury—they’re just part of getting older.

Here’s the good news: There isn’t yet evidence to say the rate of muscle atrophy after injury is greater in older people vs. younger.

In fact, I would hypothesize the rate of atrophy would be lower in older individuals, as they’re already undergoing some degree of muscle atrophy.

However, I also would imagine that while younger folks may lose muscle size at a greater rate, they’d also be better able to recover their pre-injury strength more quickly, owing to their youth and capacity for recovery. But for now, this is all speculation.

While muscle protein synthesis is constantly going on within your body, it can be further optimized by sufficient dietary protein intake.

Here’s where things get challenging: An injured person is likely to be less active, and inactivity can lead to decreased energy requirements and appetite.

For many, energy intake will decline. And this can mean you’re not eating enough protein to support muscle maintenance. Conversely, sufficient calorie and protein intake can help abate muscle loss.

Good news: Muscle atrophy from injury can be reversed once you’re healthy again.

This might seem obvious but bears highlighting. Follow the advice of a medical practitioner first and foremost. They are the experts.

Don’t try to rush your return from injury for the sake of staving off a fractional muscle loss. Your “gainz” will return—and a hell of a lot quicker if you’re fully recovered.

Similarly, when working with an injured client, adhere to the recommendations of their doctor. Let the pros play the lead, while you play a supporting role.

2. Return to physical activity when you (or your client) can, within reason.

This is an extension to the above point. We know long-term immobilization is generally bad, so you do want to get moving again as soon as you reasonably can.

Movement is beneficial from both a healing perspective and a psychological one. However, this needs to be done within the advice of the healthcare professional, and common sense.

Yes, if you break an arm, you can still perform lower-body exercises. If you sprain an ankle, you can do single-leg resistance training on the unaffected side. But in either case it’s not the time to try and chase 1RMs.

Generally, you’ll want to scale workouts well within the boundaries of “easy,” then take a progressive approach to strengthening over time.

Particularly during the acute phase of injury, when the muscle is most susceptible to atrophy, maintain a sufficient protein intake.

For athletes, the typical recommendation is 1 gram of protein per pound of bodyweight per day. Ideally, you want to consume a serving of protein every three to four hours to optimize muscle protein synthesis.

Injured people may find their appetite declines when they are less active, but it’s important to avoid being in a calorie deficit.

If appetite is an issue, consider liquid calories (read: protein shakes), which are less filling. Other high-quality protein sources include egg whites, lean meats, and milk.

Bottom line: Muscle atrophy after injury sucks, but it’s usually not as bad as you think.

If you’re the one who’s hurt, don’t panic about losing “them gainz.” If your client is hurt, assure them that muscle decline typically is not severe and generally is reversible once they’re healthy.

The loss of some muscle size and strength is inevitable. However, there are actions you can take to reduce the extent of this decline.

One is looking after your diet and consuming a sufficient amount of calories, especially protein. Another is reasonable mobilization, employing resistance exercise on the healthy parts of your body while protecting injured areas.

We don’t yet know that someone older is at risk for greater muscle atrophy than a younger person.

Finally, as a reminder: Always work within the directions of the involved medical professional.