How to train the deadlift using a variety of self-correcting cues. 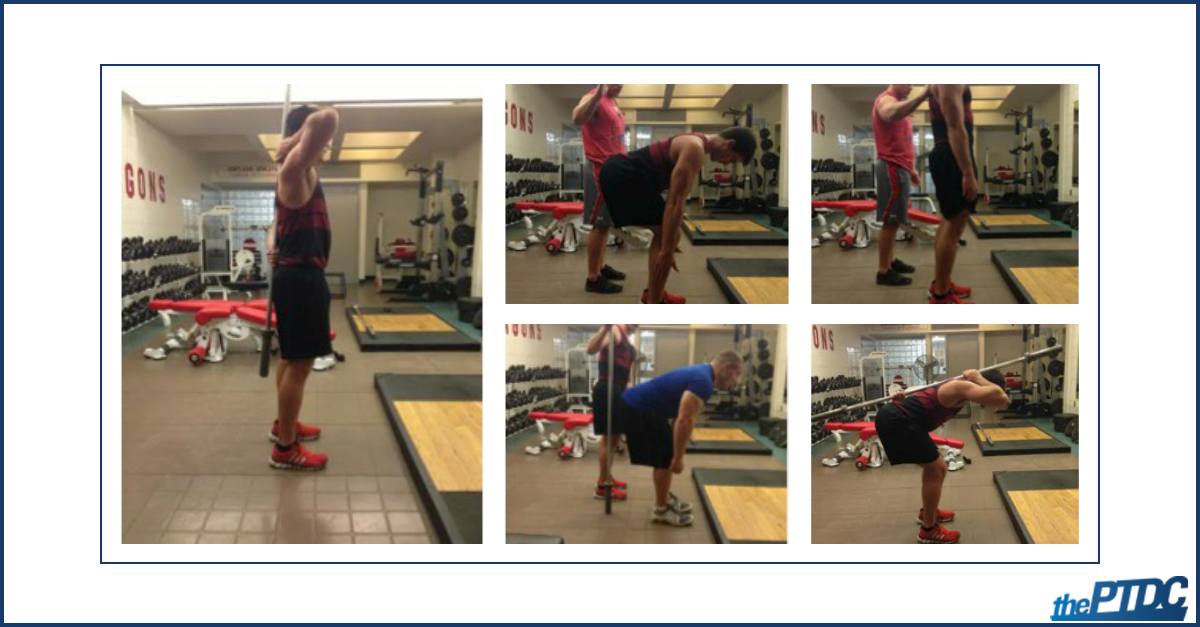 I LIKE TO HAVE ALL OF MY ATHLETES DO SOME FORM OF DEADLIFTING. It’s a great full body exercise that helps develop the hip extensors. Frequently, I deal with coaching 12-25 athletes at any given time, making 1 on 1 attention difficult. For this reason I use some approaches that can help the athlete rapidly learn the hip hinge movement.

The hip hinge is the basic movement for many valuable exercises such as the deadlift, kettlebell swings, and good mornings. For most athletes and clients new to weight lifting this may seem like an odd, unfamiliar, or hard to grasp movement.

To complete the hinge, the hips need to be pushed in a posterior direction with the spine staying neutral continuing the flex at the hips until the chest is facing the ground.

Three common problems that arise with this movement are:

Cues that I use aren’t always exclusive to one problem. For example, a trainer or coach could use a dowel placed in the hip crease. The client or athlete places their feet shoulder width apart while holding a dowel at hip level with a snatch grip. They then hinge back until their torso is parallel with the ground. If they complete the exercise correctly the dowel will stay in their hip crease. This is a great cue for two reasons – it’s self-correcting, meaning if they do it wrong — If they flex their back, squat, or fail to push their hips back — the dowel will fall out of the hip crease.

The self-correcting aspect of this cue leads to another reason why this is a great exercise, especially if you’re dealing with a small or large group. You can leave the person to figure this exercise out for several minutes, go coach other clients or athletes, and then come back to check up on their progress. They’ll know when they have the exercise right.

During the squat the hips and knees flex. Because the hamstrings flex at the knee and extend at the hip there isn’t a real change in muscle length so they shouldn’t feel a stretch sensation. Although the hinge movement still involves hip flexion and knee flexion, the knees flex far less and the hips flex to a much greater extent, leading to a change in muscle length.

When a person is flexing too much at their back I use two cues.

The first one involves them getting down on all fours and actually flexing their back. I find that it’s easier for people to move into flexion, or at least understand the concept when compared to extension. After they go into flexion, I tell them to do the opposite movement and move into extension. From there I’ll place my hand on their spinal erectors, letting them know these are the muscles I want contracting when they are hinging. Next, having the client hold a dowel on their back is a great cue to help them recognize if they’re flexing. One hand should be holding the dowel on their neck and the other on their lower back. If they flex at their back they’ll break contact with the hand on the lower back, making for another great self- correcting cue. Finally, if the back is flexing the trainer can actually correct this by having the client put their hands behind their neck with their elbows pointing out. The trainer then applies an upward force on the elbows while placing their hand on the lower back, putting slight force downward.

However, a cautionary note: Often with this cue I’ll see clients tense up or turn the hinge into a squat by dropping their hips down. Using the cue that they should still feel a stretch in their hamstrings, meaning they don’t drop their hips, is helpful. A final cue I’ll use is the partial range of motion hinging. For this the client may only perform 1/4th of a repetition until that pattern is down.

Take a dowel or a bar and place it behind the client. Have them bend their knees slightly but cue them to not allow the knees to come forward. From there they push the hips into the dowel. Once they’ve done 5-10 repetitions with success, move the dowel back and have them perform the equivalent of a half rep.

Perform another 5-10 repetitions until they’re comfortable. Finally move the dowel even further back and have them push their hips backwards and into the dowel until their chest is parallel with the floor.

One last thing is the completion of the lift. It’s common to see a person finish the lift by extending the lower back rather than extending at the hips and posterior tilting the pelvis.

The trainer can put their hand behind the client to ensure that they aren’t over extending. This is good to prevent over extension but doesn’t necessarily guarantee that they’ll be using their glutes to finish. Coaching the hip bridge and helping clients understand how to extend at the hips and posterior tilt during this exercise can help teach proper lockout. These cues are by no means the only way to teach the hinge. The key is to fit exercises to clients, not clients to exercises. There’s no need to spend a whole hour hammering away at coaching the hinge movement if a client isn’t making progress. Find alternative exercises to train the hamstrings and glutes that can be easily mastered.

Hip bridges, lunges, and rear leg elevated squats are great for training the lower body and don’t demand as much technical mastery.